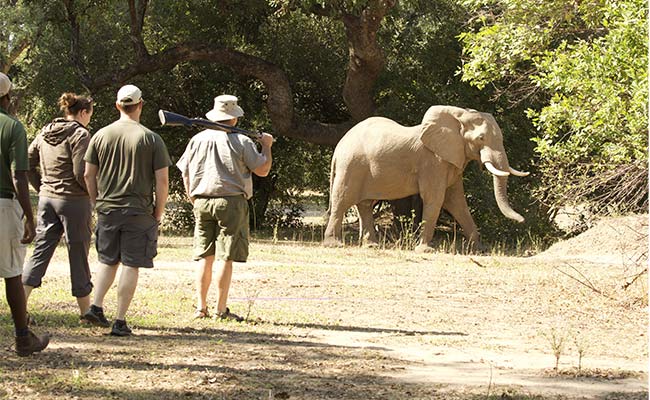 This month saw the start of our new 2019 safari season at Bushlife Safaris. We welcomed Natalie Pienaar back to Vundu Camp as camp manager. Natalie has vast experience in the hospitably industry, a flair for food and a wonderful demeanour that ensures all of our guests have the best safari possible.  The season certainly started with a spectacular showcase of all the best wildlife that Mana Pools can offer.

About 5 weeks ago we confirmed that Blacktip, the alpha female of the Nyakasanga painted wolf pack, had passed on. We wondered whether there would be any pack dispersal from one of the other Mana Pools packs, or if the new alpha female would come from the current pack – given that all bar one painted wolf in the Nyakasanga pack are Blacktip and Jiani’s offspring. We got our answer this past week in Mana Pools when we saw Jiani mating with Violet – the new alpha female – and his daughter. What effects this in-breeding may have on the next litter only time will tell…

Guests had fantastic sightings of elephants from the bank whilst on a canoe trip, Harry is  one of the collared males was seen in the morning. Another team of guests observed a crocodile trying to kill a female kudu at green pools, fortunately she managed to free herself although with serious bleeding from the nose – they reported that a pod of hippos were just watching and a hyena came in to try its luck too with no success. Hyenas were also sighted on a different walk, buffalo and several species of birds too. Late evening lions were calling from behind camp and luckily early today morning team on a game drive sighted 2lioness by the airstrip hanger. Nyala was seen at Little Vundu. Civits, white tail mongoose, were seen on a  late night game drive to the platform. Leopard were also spotted close to Vundu Camp sneaking into the jess.